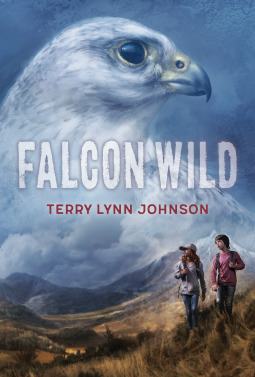 I was thrilled when the author offered to send me a copy of her book, because I’d had it on my TBR list for a while. I think kids who like outdoor adventure books are going to LOVE this one. It’s action-packed, fast-paced, with a resourceful female protagonist, and all condensed into 170 pages to appeal to a wide age range. I learned a lot about falconry, but the adventure kept the focus on the story, not the facts.

Thirteen-year-old Karma is lost in the backcountry of Montana with her falcon, Stark, and a runaway boy named Cooper. She ‘s desperate to find help for her dad and brother after they find themselves in a terrible accident on a back road.

Karma wouldn’t be in this mess if her parents hadn’t insisted on returning Stark to the bird’s original owner. Life at her father’s bird sanctuary–and Karma’s dreams of becoming an apprentice falconer–will never be the same now that she has to give Stark back. Lost in the wild, her bond with the tamed falcon only grows stronger. All the while, Cooper gets his own lessons on how to trust in newfound friendship.

Both Karma’s and Cooper’s mettle is tested by mountain terrain, wild animals, severe weather, injury, and their own waning hope as this edge-of-your-seat adventure story vividly portrays the special bonds that can form between humans and animals.